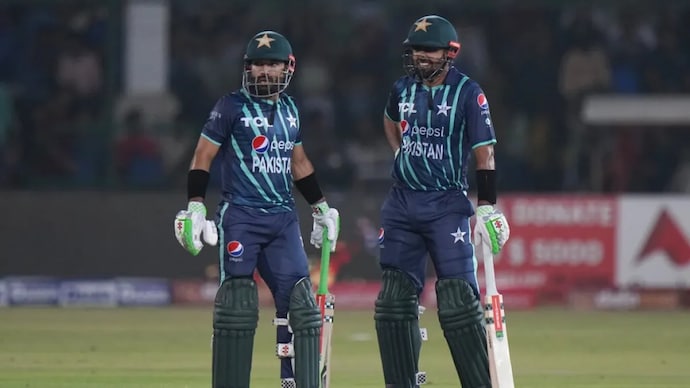 It wasn’t just about him: Hayden praises Babar for throwdowns to Rizwan. Courtesy: AP

Pakistan won the match by seven wickets and advanced to their first T20 WC final since 2009 where they defeated Sri Lanka. Both Babar and Rizwan were struggling for form although the Men in Green somehow managed to qualify for the semis.

In the semis, both batters put forth their A-game and stitched together a 105-run stand for the opening wicket after Pakistan were asked to chase down 153.

Hayden, who joined the Pakistan national team back in September, lauded Babar for sending throwdowns to Rizwan before the match at the SCG. Hayden spoke about the same in a dressing room video uploaded on Pakistan cricket’s Twitter handle.

“Sensational performance. I think as coaches and a team, we can only ask about giving our best and clearly tonight that was the case. It was just an extraordinary effort. I want to make a special mention to a moment that I saw at the start of play and that was Babar throwing balls to Rizzy and I thought, from an opening partnership’s point of view, that’s exactly what this team requires,” Hayden said.

“It’s just extraordinary that they decided to do that. There were plenty of coaches around, but Babar showed that it wasn’t just about him, it’s also about his mate at the other end,” he added.

Rizwan went on to bag the Player of the Match award after he scored 57 runs with the help of five fours. Babar also regained form by scoring a fifty, helping Pakistan get past the finish line with five balls to spare.