FIFA World Cup 2022: Saudi Arabia went a goal down to Argentina in the first half but hit back twice in the second half to stun Lionel Messi’s side in a Group C match in Doha on Tuesday. 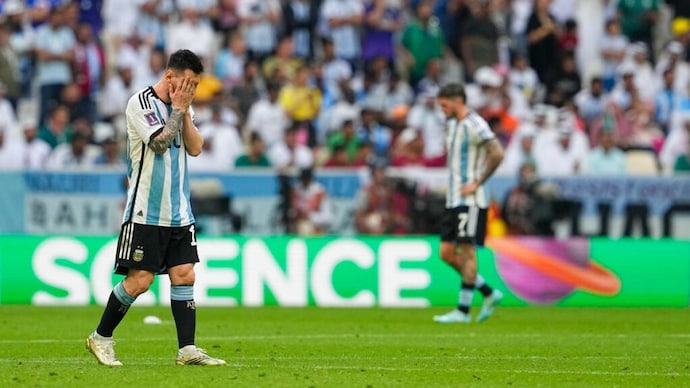 By Saurabh Kumar: Saudi Arabia did the unthinkable to pull off one of the biggest upsets in World Cup history as the Green Falcons stunned Lionel Messi-led Argentina 2-1 in their World Cup 2022 Group C opener in Doha on Tuesday. Herve Renard’s men used every ounce of their energy in a spirited display to script one of the greatest victories by an Asian nation in the biggest football carnival.

The Lusail Stadium hosted the game in a remarkable atmosphere, with thousands of Saudis crossing the border to support their team joining Argentina’s customarily large and boisterous fan base.

Argentina were on course to equal Italy’s record unbeaten run of 37 games after the mercurial Messi opened his fifth and final World Cup with a 10th-minute penalty. But La Albiceleste were stunned in the second half when Saudi Arabia scored two goals in five minutes to take a 2-1 lead in Qatar. Saleh Alshehri leveled for Herve Renard’s side minutes after halftime before Salem Aldawsawri put his side ahead with a stunning strike.

Messi scored the penalty against Saudi Arabia after a video review spotted a foul before Argentina had three goals disallowed. Messi, 35, beat Saudi goalkeeper Mohammed Al-Owais on a breakaway, but that goal, as well as two others by his teammate Lautaro Martinez, were ruled offside.

A calm Al-Owais made some stunning saves to deny Argentina a number of goals and help Saudi Arabia register their first-ever win over La Albiceleste. This defeat comes as a shock for Messi-led Argentina, who had entered the World Cup as one of the favourites to win the title in Qatar after the Copa America triumph in 2021.

“Our team makes our dreams come true!” and “Where has Messi gone? We defeated him! “, the green-clad Saudis chanted repeatedly in the Lusail Stadium, on their feet and deafeningly welcoming every clearance from their defence.

Lionel Scaloni’s side appeared to be on course for a routine victory after going up 1-0 after only 10 minutes, but Saudi Arabia rallied to hand Argentina a defeat. Now, La Albiceleste will take on Mexico next in the World Cup on Saturday in Group C.