T20 World Cup 2022: Australia head coach Andrew McDonald shed light on why the Melbourne Cricket Ground is being prefered over the Docklands Stadium, which has a retractable roof, even as rain has played spoilsport in Melbourne in the ongoing tournament. 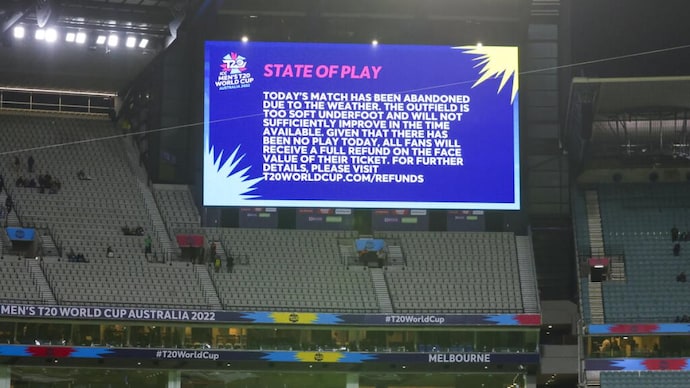 By India Today Web Desk: Australia head coach Andrew McDonald said on Friday that it’s up to the International Cricket Council to schedule if matches in Melbourne can be played at the Docklands Stadium during rainy weather in the city. The Docklands, which has been used for Big Bash League matches and hosted a few ODIs in the past, has a retractable roof to help carry on with play even when it’s raining in the city.

The Docklands is less than 5km from the Melbourne Cricket Ground but the latter has been preferred for international matches and major International Cricket Council matches due to its seating capacity and the history that the ground has offered in the past.

The MCG Stadium has witnessed 3 washed-out matches in the ongoing T20 World Cup in Australia. While the big-ticket match against India and Pakistan escaped the wrath of the wet weather on Sunday, Afghanistan’s match against New Zealand on Wednesday was abandoned. Moreover, the first match of Friday between Afghanistan and Ireland was also abandoned without a ball bowled. Fans had turned up in numbers to watch Australia take on their arch-rivals at the MCG and even after a brief break in rainfall, the match was called off.

Notably, the outfield was not covered even as steady rain lashed the stadium on Friday.

“I think everyone likes to play at the MCG. You can’t predict the weather but what you do know is the Melbourne fans generally turn out when it’s England and Australia. There’s probably no better stadium that you want to be playing than the MCG. Whether you want to be playing at stadiums with roof on it, that’s up to the scheduling. Yeah, it (Docklands Stadium) down the road but it’s not a purpose-built cricket venue. BBL games are being played there,” McDonald said on Friday.

McDonald’s comments came after former England batter and Afghanistan head coach Jonathan Trott said it was frustrating to have two of their games washed out and lamented not using the Docklands Stadium.

“It is very frustrating. That’s what happens this time of year and the beginning of summers. This always has the potential to happen, and it’s just really unfortunate. The frustrating thing as well is there’s a stadium down the road that’s got a roof on it as well so you can play cricket there. So we could have had lots of cricket,” he added.

McDonald, furthermore, said he is actually surprised by the amount of rain Melbourne has seen in the last few days.

“I would have been keen to play, whether it’s a 5-over game or a 20-over game. I thought we were ready to get on to the field. We were prepared for it. England have obviously caused us a few problems in the recent past, but we were well prepared for whatever might have happened,” he added.