Champions League: FC Barcelona manager Xavi wants his team to play to their full potential in their final group stage game against Bayern Munich. Barcelona have a slim chance of going through to the next stage, but for that they have to win first. 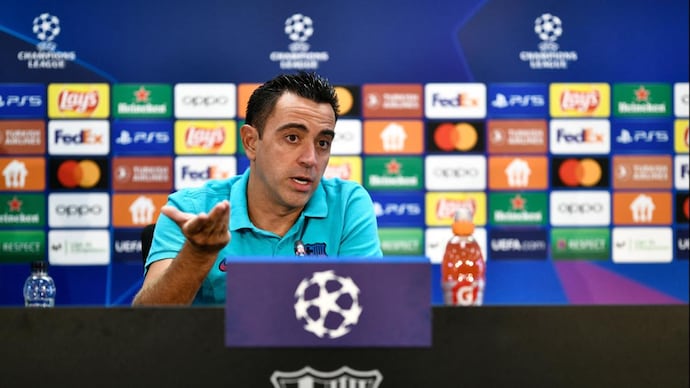 By India Today Web Desk: FC Barcelona are set to face Bayern Munich in their final group stage game in the Champions League. This could be Xavi’s final Champions League game of the season as they might be knocked out of the competition in the group stages itself – for the second year in a row.

The team is dependent on the Viktoria Plzen who have to defeat Inter Milan in their final group stage game for Barcelona to go through to the group of death. Xavi wants his team to play fearless football and has said that he would like to see the true character of FC Barcelona in their last group stage game.

“We have to show ourselves that even if we are knocked out (of the Champions League) we are a good team and we can compete against the best teams out there,” Xavi told a news conference on Tuesday.

“That game in Munich was a disgrace because we deserved much more. That was an accident because we lacked the final touch.
Even though Barcelona had more possession than Bayern and outshot them 18-13, the German side scored twice in four minutes against the run of play to secure the win,” Xavi further added.

FC Barcelona will hope to expect something extraordinary from the Milan match and pray for a favourable result against Bayern, who they have not defeated in a long long time.

“I don’t like to talk about miracles… we have a small hope. Though we are in a very uncomfortable situation.

“The numbers are all against us. But … unexpected things can happen.”

Barcelona, who also exited the tournament following the group stage last season, suffered another setback when they were handed a 3-1 defeat by Real Madrid in this month’s El Clasico.

Xavi said that he and his players will watch the Inter game together in the changing room, but refused to send a message to the Viktoria Plzen players ahead of the match.

“I already have too much in hand to start playing the coach of other teams,” Xavi laughed.

“We have not been at the level that we wanted in some games. I have the feeling that we (at times we) had it in our hands and now it is not up to us. So we are facing this situation only because of our own mistakes.”